Registration for 2023 New York State Poetry Out Loud is now open! We will return to in-person programming for the 2023 Poetry Out Loud Semifinal and State Final competitions. In addition to the live/in-person Semifinals, we are offering the alternative to participate in a virtual Semifinal (students will be asked to submit video recordings of their performances). The State Final competition will be held in New York City in March 2023.

Registration is now CLOSED. If you missed the deadline but still want to participate, contact us at pol@twc.org.

Schools may choose to have their POL champions participate in one of the in-person Semifinal events listed or in a virtual Semifinal. Both school champions must participate in the same Semifinal event. The virtual event will be conducted by recorded video submission. The State Final will take place in New York City. Finalists will be offered a stipend for travel expenses.  NOTE: Semifinal locations may change based on school registrations.

Welcome to Poetry Out Loud in New York! 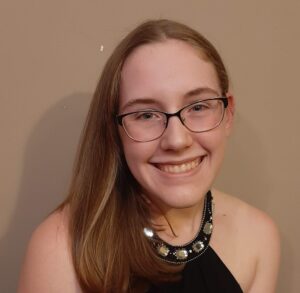 Pamela went on to make it to the National Finals, broadcast at arts.gov on June 5th

Pamela White, a junior from Bethlehem Central High School located in Delmar, New York was named the 2022 New York state winner of the Poetry Out Loud High School recitation competition at the finals event which was livestreamed by Teachers & Writers Collaborative on March 12th. The runner-up was Lia Laurita, a senior from Herricks High School in New Hyde Park, New York. Both Lia and Pamela are among the 16 state finalists who gave stirring performances of classic and contemporary poetry.  View the state final on T&W’s YouTube channel

Pamela moved on to join finalists from all 50 states and 5 U.S. territories to compete in the 2022 Poetry Out Loud National Semifinals, and was among the top 9 students competing in the Finals. Students competed for more than $50,000 in awards and stipends, including a $20,000 grand prize. The National Finals streamed from arts.gov on Sunday June 5th, 2022.

CLICK ON EACH REGION FOR A PROGRAM OF STUDENT NAMES & POEMS. All poems recited can be found in the online anthology at poetryoutloud.org.

What is Poetry Out Loud?

Poetry Out Loud is a national poetry recitation competition, open to students in grades 9-12. This program helps students master public speaking skills, build self-confidence, and learn about diverse poets and their work. The National Endowment for the Arts and the Poetry Foundation partner with US state arts agencies to support Poetry Out Loud, which encourages the nation’s youth to learn about great poetry through memorization and recitation.

Teachers & Writers Collaborative manages Poetry Out Loud in New York state, in partnership with the New York State Council on the Arts.

Poetry Out Loud uses a pyramid competition structure that starts at the classroom level.

Preliminary Competitions at Schools and for Independent Students Classroom 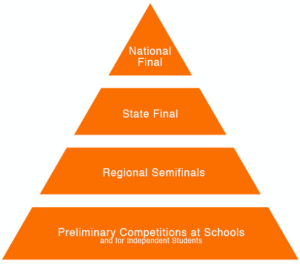 School coordinators or others organizing a local POL competition should familiarize themselves fully with the rules of Poetry Out Loud at these links:

For State semifinal and final competitions, students must prepare three (3) different poems selected from the official Poetry Out Loud Anthology, searchable online at poetryoutloud.org.  The three poems must meet the following criteria:

The online Poetry Out Loud Anthology has filters for "Pre 20th Century" and "25 Lines or Fewer" that make it easy to find poems that meet these criteria.

NOTE:  While the same poem may fit both requirements (eg. the poem is under 25 lines and written before the 20th century), the students must still prepare three different poems -- one distinct poem for each round of competition.  During a live/in-person competition, all students will perform two poems of their choice.  Students with the highest scores will move on to a final round of performance. Students choose in what order they wish to recite their poems.

Any school or community organization with at least 2 students can participate in the State Semifinals. 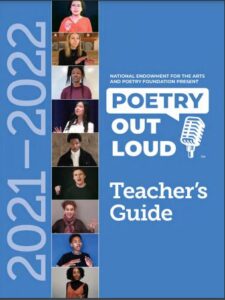 Awards are made in the form of lump sum cash payouts, reportable to the IRS. Tax liabilities are the sole responsibility of the winners and their families.

About the Virtual Semi-final Competition

Here is a summary of what took place:

Get started by registering with us and start a program in your high school or community.

An entity needs at least two students to participate in the national program. Individual or groups of teachers, a school club, the entire school, or an out-of-school program for high school-aged individuals may participate. Please register by November 15, 2021.

Poetry Out Loud (POL) can be a boost in your community and a great addition to your current curriculum or programs. Here are examples of ways you can start a local program:

For any questions or information, or to let us know you’re interested in registering for the next school year, contact us at pol@twc.org.

Bring a virtual POL poetry-writing program to your school or community center.

In our workshops, students create original poems inspired by the poems in the POL collection. Through this creative practice, student deepen their comprehension and personal connection with the POL poems.

Stay up to date with news and events